2 Comments Posted by frolickingfoodie on August 26, 2009

“big dark blobs burned like a plate of eyes”
Seamus Heaney, a poet I hugely admire and have been lucky enough to see read in person, is who I hand over to to describe this time of year in England, where blackberries and greed abound:

Late August, given heavy rain and sun
For a full week, the blackberries would ripen.
At first, just one, a glossy purple clot
Among others, red, green, hard as a knot.
You ate that first one and its flesh was sweet
Like thickened wine: summer’s blood was in it
Leaving stains upon the tongue and lust for
Picking. Then red ones inked up and that hunger
Sent us out with milk cans, pea tins, jam-pots
Where briars scratched and wet grass bleached our boots.
Round hayfields, cornfields and potato-drills
We trekked and picked until the cans were full,
Until the tinkling bottom had been covered
With green ones, and on top big dark blobs burned
Like a plate of eyes. Our hands were peppered
With thorn pricks, our palms sticky as Bluebeard’s.

We hoarded the fresh berries in the byre.
But when the bath was filled we found a fur,
A rat-grey fungus, glutting on our cache.
The juice was stinking too. Once off the bush
The fruit fermented, the sweet flesh would turn sour.
I always felt like crying. It wasn’t fair
That all the lovely canfuls smelt of rot.
Each year I hoped they’d keep, knew they would not.

So don’t squander your blackberries (I’m hoping there will be a final flush soon, if the sun comes out again) 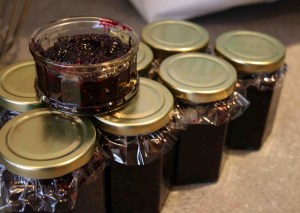 It is REALLY REALLY EASY. TLM has had the first jar, and apparently tastes good, is the right consistency and (honour of honours) tastes “just like normal jam … “!

Ingredients – make 7 jars (which should be sterilized beforehand – by a thorough wash with soapy water, then leave them to dry in a medium-hot oven and make sure the hot jam goes into hot jars before screwing the lid on tight tight tight!)
How to make it

Put two or three saucers in the fridge. Wash the blackberries, dislodging any bugs (I try not to drown them, after all they were only being greedy too). Add the blackberries, lemon juice and water to a large pan and boil gently for 30 minutes. After this stage, add the sugar and pectin and boil rigorously for 5-8 minutes. Mine took about 8 minutes until it reached ‘setting point’. This is where the cold saucers come in handy… to know when your jam is the right consistency (and not just a mushy syrup), you spoon a little jam onto the cold plate, let it cool slightly, and then draw your finger gently across the top. If the jam puckers – just a little – then you have reached setting point! You don’t want full on wrinkles, just a little resistance rather than liquidity. Be warned that this is probably runnier than you think it should be for jam. Don’t worry if you think it’s far too runny as you spoon it into the jar, as the jam will thicken when it cools. For me, runny jam is better than jam you have to chop up with your spoon.

It really hit home that this is a way of preserving, and so when I was using up the last of my apples in the garden and needed a bit more fruit, I bunged in some of this blackberry jam (removing some of the sugar from the crumble recipe to make up!) and it was scrummy.
frugal food, fruit, preserves

Beef Gyozas and a bit of a breakthrough 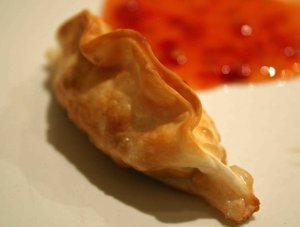 We do love a gyoza now and then, strictly as a treat as we enjoy them in their unhealthily cooked forms. I’ve recently found a local shop that stocks gyoza skins, so they’re back on the menu.

Now, our favourite place to eat gyozas is Wagamama, and I’ve long-marvelled at how they get the pastry so dry and crispy, yet the inside moist and delicious. It’s not just deep-frying as I’ve tried that before (and I actually find them far too fatty when deep-fried) and didn’t get quite the same effect – see gyozas here. Tonight, however an experiment and a brainwave combined to solve the problem. So I now present my (current) favourite way of cooking gyozas.

How to cook a gyoza/ dumpling/ pot sticker

And this method is my new way of cooking them. They sit upright, the pastry is crisp and the inside is moist still.

(Wondering why this comes under ‘frugal food’? Well, the filling was comprised mainly of roast dinner leftovers. You know that nub of beef that can’t be carved and is use to neither man nor beast? I simply shoved it in the whizzer, then added two cloves of garlic and two shallots. I finely chopped some mangetout and added it to the whizzed mixture, before sprinkling in a little white pepper, sesame oil, hoisin sauce and Chinese rice wine.)

4 Comments Posted by frolickingfoodie on February 23, 2009

I hope I’m not alone in finding 78p for a single pepper in a supermarket highly objectionable. On the whole, I usually get a big bag of the value peppers – especially if they aren’t just green ones – and we eat things with peppers in for the whole week.

Unfortunately, my meal plans were scuppered when I couldn’t resist eight red peppers for a pound at the local market (yes, that’s the translation of the title!) So I snapped them up, and walked home wondering what to do with them. On the way I stopped into Waitrose (for a browse round the bargains – none – poo) for inspiration. I spotted a jar of peppers in oil for £3.99. Well I can do better than that, I thought.

Coming home, I found an appropriate jar and cleaned the label etc off. I topped and tailed the peppers, gouge out the middles and chopped them into thick slabs and preheated the oven to 250 C. I boiled a kettle, poured it over the jar and lid and then put the jar into the oven to dry (thus, sterlising it… I hope!). I also popped the trays of peppers in. After a good 15 minutes, when the peppers were charred and the jar dry, I carefully put the peppers into a plastic food bag and left them to cool. Leaving them like this makes it dead easy to get the skins off because the condensation does all the hard work for you – and you don’t burn your fingers!

I got the peppers out of their little plastic bags and rubbed them under a running tap to get the skins off. I then chopped them into thick slices and put some in the jar, followed by a bit of oil, then some more peppers until the jar was full. They just fit!

Well, it’s been about 5 weeks since I did that and we’re nearly through them all and we’ve not yet died so hopefully I can carry on doing it when I see the bargains! The peppers are useful for salads, cous cous, sprucing up a cheese sandwich, for putting on the tops of homemade pizzas etc etc. Be sparing, of course, because they’re quite oily but they are a scrummy treat and incredibly useful.

4 Comments Posted by frolickingfoodie on January 25, 2009

While not a particularly cheery way to start 2009, I hope my pun went some way to brighten the mood! So, it’s apparently official that the UK is in recession. Everyone is talking about it. All the time. And here I am, adding my ‘voice’ to the chicken-licken situation.

I’ve not been blogging very much of late, for various reasons and I think it was because I’d lost my purpose. So I’ve decided upon a new spin, related to penny-pinching. Now, we are not in dire need of being frugal – but as we’re young and getting married, we’re trying to push as much money as possible into savings (without becoming misers who sit round a candle, with the heating off, eating gruel).

For this reason, we have come up with an ingenious scheme: strictly writing a weekly menu before shopping; not buying any lunches (though we have always done both these things, not with such fervent adherence); and now we add keeping our food receipts, sticking them on the calendar and at the end of the month we staple them and tally up how much we’ve spent. So far in January we’ve spent £109.26. For a five-week month (and having had friends over for dinner too), I feel very proud!

So what’s changing? Well I’ve always been a big freezer-user, but now I’m making meat go further by getting ratty-ish ends into little sachets that can be used in soup or made into spring rolls. I’m making stock religiously to flavour otherwise dull dishes. I’ve started to make my own bread and pizza dough, to which I am utterly converted (though I try to bake the bread at the same time something else is cooking). We’ve set a cupboard aside for ‘storage’ which is currently host to about 20 cans of tomatoes that we got on offer recently. I’m nipping to the market in lunchtime. In all, just being a bit cleverer. Another thing is realising that if you’re making a nice pudding, dinner can be scaled back! Smaller portions, saving dinners for lunches. Great for budget and belt reduction…

And we’re still eating well. Today I’m making a red pepper, lamb and lentil soup (stock from lamb shanks we had as a treat the other day) with home-made rye bread. For pudding I’m making rhubarb crumble and am toying with the idea of custard too! TLM is doing a 12 hour locum shift today, so I can spend as much time cooking as I like!

I’m not quite sure how this new spin will work out, but hopefully I’ll at least get my mojo back.