2 Comments Posted by frolickingfoodie on July 10, 2009

TLM and I were up bright and early to visit the Banksy Exhibition at Bristol Museum and after a (relatively) short queue we shuffled into the main entrance, past a ‘topical’ image of Michael Jackson sat on the doorstep of a gingerbread house offering a candy cane to two small children. Once we were ushered into the museum we were able to roam free and as part of the first batch into the museum it was still relatively quiet as we looked first at the specially set-aside exhibition and then made our way round the museum, spotting substituted paintings, hash pipes in the ‘boring old plates’ room and muzzled lambs and beavers with trophies in the taxidermy section. 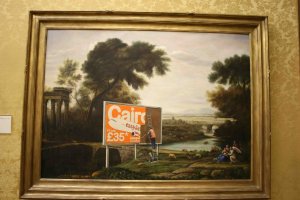 One of my favourites, the ‘Flight from Egypt – budget version’ was one of the substitutions in the main painting rooms. 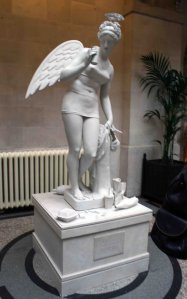 The ‘ANGEL OF THE NORTH’ had me laughing my socks off (particularly as I’m going up to Manchester tomorrow for a girly night out). Fag, can, heels in hand and kebab wrappers on the floor.

The animatronic bunny sat filing her nails endlessly. I don’t know why, but I was captivated. Maybe because she was ignoring me?

The exhibition continued: hilarious, thought-provoking, submersive etc etc. As we were coming to the end, hoardes of people were rammed in to the museum and a whole load of teenagers flocked from piece to piece, indiscriminately taking camera phone pictures of everything – quite befitting.

Afterwards, we wandered up the road and stopped in a little patisserie… (note the grubby finger marks) 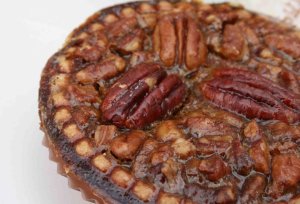 and I ate the whole of this little delight, which was like a treacle tart but with added pecans. Hum-a-nah.