7 Comments Posted by frolickingfoodie on March 29, 2009 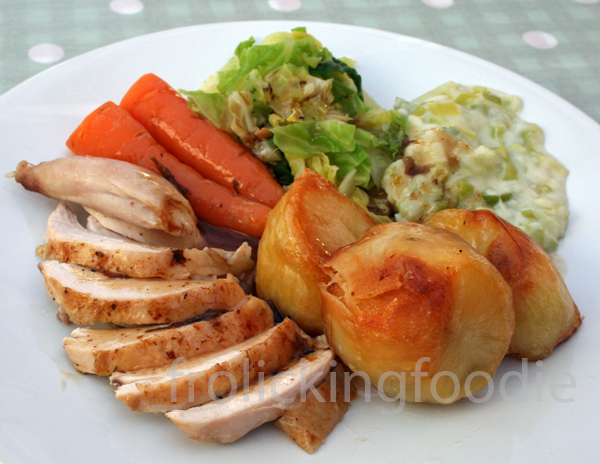 The roast dinner is the cornerstone of great British cooking, and the roast chicken the foundation of so many dishes. Considering this, maybe it seems a bit strange that I’ve not blogged about it yet. Or is it really so strange? I’ve been reluctant to blog about it. Everyone has their own idea of what a perfect roast is, and really anything slightly different from that is just not good enough. I don’t mean just in terms of when things go clearly awry (dad, I’m thinking of those Yorkshire flops I made last week!) but also when a vegetable you love is missing, or prepared differently. Wondering if the dinner would be better still with your favourite Parmesan parsnips can sour an otherwise lovely meal. Think of all the pressure that’s put on Christmas dinner – and how it ought to be perfect. Smugsters point out that a Christmas dinner should be fairly easy as it’s just a roast dinner with extras. True. But they’re probably the same lot who don’t recognise all the expectation that goes into a weekly roast dinner. When anyone presents a roast dinner it is instantly open to judgement: the roast is subject to examination and scrutiny unlike any other meal. This is why I’ve been shy in showing you a roast dinner.

I’m happy to show this, not because I think it’s perfect (the gravy certainly wasn’t) but because it’s about bloomin‘ time and I admit that I was fairly pleased with this one. I present this as a version, not even my own definitive version, and as a record of how it worked today – because I did a few things differently and they seemed to lift my roast to a better level than before. So, blow by blow, here is my roast:

. I started the chicken much earlier than I wanted the roast. This leaves time to make the gravy, and vitally lets the chicken rest so it can be carved with ease. As I used a small chicken, I put half a lemon, two cloves of pink garlic (it’s very strong but I would ordinarily use a bit more), three sprigs of thyme and some sage leaves into the chicken cavity. I chopped an onion in half and sat it in the same pan as the chicken. I cook the chicken at about 190, and I keep it covered for 2/3 of the cooking time and uncover it for the last 1/3 of cooking. I baste about three times in total. Now, I never really do cooking times, but I always just if a chicken is cooked by yanking on the leg. If there is ‘give’ in the leg and it doesn’t resist yanking on it, and deep down in the thick of the carcass the meat isn’t pink, then it’s cooked. This is usually about an hour and a half for a small chicken. Now, I ran out of kitchen foil, so without wanting to leave it uncovered I used greaseproof paper. This was a revelation. The chicken didn’t steam during the covered cooking time, but there was still plenty of juice. I’m definitely going to use greaseproof in future! Plus, when it comes to carving it holds the juices well (I’m clumsy and often stab the foil and end up with juices dripping on my feet).

At this stage I start on the potatoes. The first step is to peel and cut them. I use Nigella Lawson’s method of cutting on the diagonal, so that each well-sized potato makes three roasties. I then par-boil the potatoes, until a knife goes in without much prodding. The potato should need a little shake to get it off the knife (rather than falling off under it’s own steam which tends to make them a bit over-cooked and liable to disintegrate in the oven). I strain the potatoes and then run cold water over them and then shake them up to get future crispy bits. I don’t know why I run cold water over them, but that’s my hocus–pocus part of roast potato cooking (and you’ll find everyone has their own – covering in semolina, using hot hot fat etc).

I then made the gravy by removing the chicken and onion (I wrapped the chicken in greaseproof and left on the side and threw the onion in a stock pot), putting the pan on the hob and stirring like mad – getting all the crispy bits off the pan. I then added some salt and pepper. I added cornflour (always mix it with water first in a small bowl and add gradually so that it doesn’t make the gravy lumpy or too thick!) Now, I could and probably should have strained it as there were some oniony bits floating around. But c’est la vie. I poured the gravy in a jug and left – you can scoop off some extra fat when it’s cool and it’s easy enough to heat in the microwave at the last minute.

Later, once the chicken was cool, I carved it. To carve the chicken the first step has already been achieved: a well-cooked chicken that has cooled. Your hands are the key to this, and a bird that’s too-hot-to-handle is a nightmare. First, the legs and wings come off (they should come off easily with a tug if the chicken is cooked properly) and then gently ease the meat away from the bones and set aside. The breasts will come off easily too. BUT, the first thing I do is to run a knife down either side of the cartilage at the centre of the bird. I then get to its neck end and find the wishbone and pull this out. Now, it’s a matter of gently separating the breast and under-breast from the carcass. DO it slowly and you’ll leave less waste on the carcass. You then end up with white meat and brown meat separately and very little wastage. 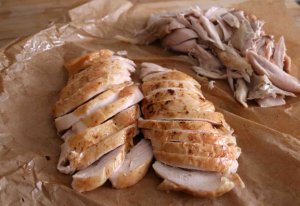 I slice both breasts and tear up the brown meat. We use one breast for a roast dinner, and the rest of the breast for weekday sandwiches. A little brown meat makes it to the roast plate but most goes to a chicken pie or other chicken-leftover meal.

You remember I said that cold water was my superstitious way of cooking roast potatoes? Well I clearly overlooked the fact that I will only cook roast potatoes in a glass/pyrex dish. My reasoning behind this is that a bad metal pan is the enemy of crunch – metal holds on to the crispy bits and strips them from your roast potatoes (same rule applies for wedges). So I always use pyrex.

I don’t baste the potatoes, but rather turn them so that each side gets an equal crunch. As the success of a roast dinner often hinges on the potato, when I see this: 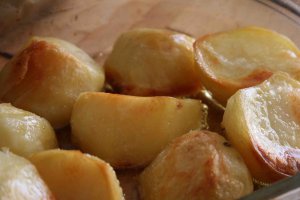 I see a 20-minute time to extraction, and know it is time to put the other veg on. When the roast potato is cooked completely, it should look like this: 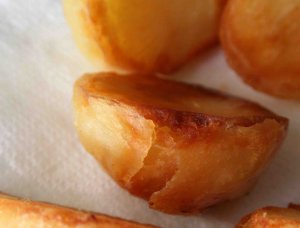 Well, it would be great if that ALL looked like that, wouldn’t it? That was the best of its batch, but it was a fine bunch. When I see the potato above, I set them out on kitchen roll to drain and I zap the gravy in the microwave for a final time. By this time my chosen veg should be cooked. (I try to limit veg, as otherwise I find myself eating vegetables just to see the wood for the trees! It’s easy to add peas as well, oh and broccoli!, and parsnips of course, and cauliflower… and you end up overwhelmed)

One vegetable portion that is a firm favourite is the leek. More specifically, when it comes as leek sauce, also known as

creamed leeks. I cook the leek sauce in industrial batches and freeze, partly because it’s a total faff to make it as and when desired, but also to make the most of leeks when they are cheap. I think I made this batch when they were on St David’s day special offer.

To make leek sauce, I slice the leeks as finely as I can bear to (the finer the better really) and then sweat them with a little salt and butter. Keeping a keen eye on them is key, because one bit of burnt leek and, to me, it spoils their taste. When they go glossy, tip them out onto a plate. Make a white sauce as you would, and once that has cooked through and thickened, turn off the heat, stir in the leeks and add a little white pepper to taste. I always cook this in the morning of a roast if I cook from scratch, to allow the leek flavour to permeate the sauce. Cooking it ahead is by far the easiest way of ensuring lots of lovely leeky sauce: 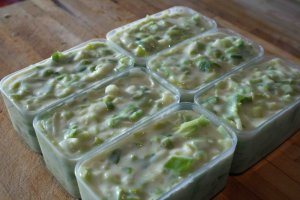 As you can see from the picture at the top, I also cooked carrot and cabbage for our roast. The carrots I just scrubbed and cooked whole, and the cabbage I cooked by pouring boiling water over, letting it come to the boil on the hob and then immediately turning it off. This way, the cabbage doesn’t seem to over cook.

Finally, I put the carcass along with the onion it was roasted with, the garlic (but not the lemon), some pepper corns, a bay leaf, a carrot and some celery into a pot which will be boiled for stock. I had some bacon (the fatty parts that we cut off when having bacon for breakfast) and threw that in for good measure too. 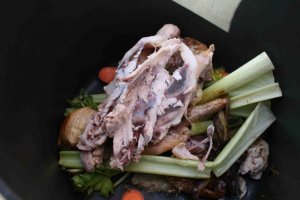 How do you do yours?

British Flavours, chicken
← Beef Gyozas and a bit of a breakthrough Willie’s Cacao →