6 Comments Posted by frolickingfoodie on June 1, 2008

I promised to make The Little Medic a cake for finishing his finals and his request was not much of a surprise. His favourite cake I make is marzipan fruit cake (the marzipan is mixed in and turns into chewy nuggets), but anything with cherries is his second choice. As a result, I have a cupboard full of morello cherry jam, natural glace cherries, maraschino cherries, bottled morello cherries, tinned black cherries…

This time, he pointed out a cake from a book I’ve not trusted for some time. I looked at the recipe and the quantities for the sponge seemed complete nonsense. By the time I read the final instruction to cut the sponge in half to make a sandwich I had lost all faith. However, he argued that maybe a gateau was different to a sponge cake (I was unconvinced) led me to follow the recipe. As I predicted – and maybe as a result of my prediction – the ‘sponge’ was flat and RUBBERY?!! I threw a small wobbler in the kitchen, stomped around saying I should have trusted myself and defiantly lobbed the sponge into the bin (it made a retaliatory thud at the bottom). I flung the un-trustworthy recipe book on the floor, and turned to my fail-proof Marguerite Pattern sponge cake recipe. 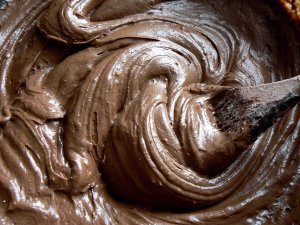 My mum never let me try the mixture because she has a ‘thing’ about raw eggs, but now I’m a grown up I can tell you that licking that spoon was heaven Ingredients – Chocolate Sponge

How to Make it

Preheat the oven to 190 Celsius, and get someone with patience to line two 6-7 inch (15-18 cm) sandwich tins. Cream the butter and sugar together. Add an egg, mix. Add half the flour and cocoa powder, mix. Add the remaining egg, mix. Add the remaining flour and cocoa powder, mix. Split the mixture between the two sandwich tins. Cook just above the centre of the oven for about 15-20 minutes. I usually swap them round half way through. To tell if it’s cooked you can initially use the finger-impression method (i.e. if it leaves an indentation it’s not cooked yet) and back it up with the skewer method (i.e. if you test it in the centre with skewer and gooey bits stick to it, it’s not done). When cooked, let the cakes cool in a rack for 2 or 3 minutes, then turn them out carefully. If you leave them in their tins they will overcook and dry out.

I actually made the cherry filling before the sponge to let it all cool down.

How to Make it

Put the cherries, sugar and liquid in a pan and simmer for 5 minutes. Remove the cherries. Add the syrup back and cook for a minute or two longer to thicken, as you want the syrup to soak slightly into the sponge and not make it soggy. 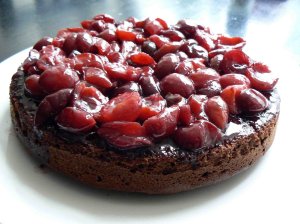 After adding the cherries, I whipped the cream for the centre. I took on board what Nigel Slater had to say on “A Taste of My Life” that cream should not be overwhipped, and should look like an unmade bed. This proved very sound advice.

I didn’t bother to cream or decorate the top because it would be eaten in a few sittings and some fresh cream each time drizzled would spruce it up, rather than have it going claggy on top. TLM said it was delicious (and he says it tastes even better today – funny how that’s the case with a lot of cakes) and tucked in to a very messy, but very decadent, slice: 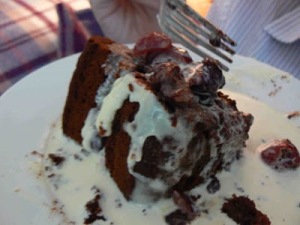